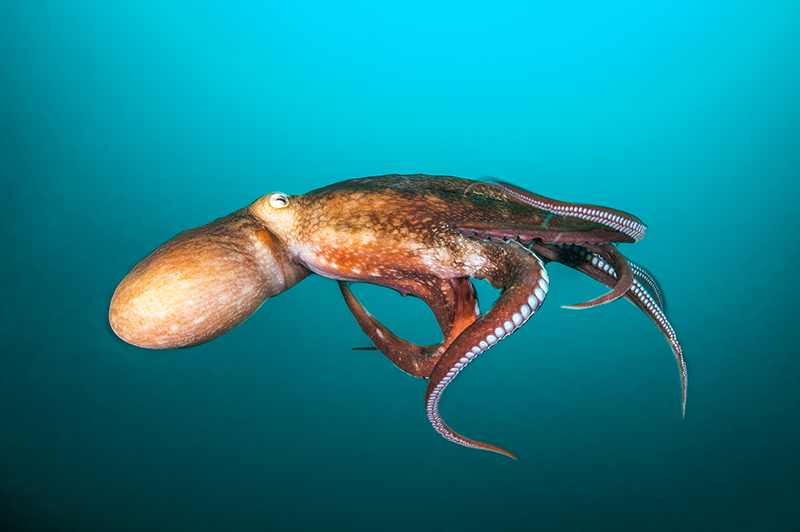 Olivia Judson has an article in the January/February issue of The Atlantic on the Octopus.  Her fascination with the creature started when she was a child and found the book Octopus and Squid: The Soft Intelligence (1973) in her great-aunt’s bookcase.  Written by Jacques-Yves Cousteau, and his colleague Philippe Diole, the book told of encounters between the divers and cephalopods – the group that includes octopuses, squid, cuttlefish, and their more distant cousins, the nautiluses.

“A few days after I’d finished reading, I was out snorkeling and saw my first wild octopus….

“Cousteau and his team were the first to spend a lot of time – many hours at a stretch – in the water observing and filming wild octopuses and getting to know different individuals by visiting them regularly.  Before long, some of the animals would come out to greet the divers, even climbing onto them and going for a ride.  Others were shy, and would stay in their holes.  Some appeared to develop preferences for particular humans.  The divers wanted to know whether octopuses – as suspected – steal fish from fishermen’s nets, so they set up a net complete with several fish, and settled back to watch.  Sure enough, an octopus came and helped itself to the lot.  Another octopus opened a jar containing food, while a third seemed disturbed by its reflection when shown a mirror.

“Cousteau’s accounts are anecdotes, not scientific experiments.  Yet, taken together, they capture three aspects of octopuses – some species of them, at least – that strike anyone who spends time in the water with them.

“First, different individuals have different temperaments.  Some are shy, some are bold; some are inquisitive, some aggressive.  Because of this individuality, people who hang out with them, whether in the sea, at a public aquarium, or in the laboratory, tend to give them names – an honor normally reserved for mammals such as dolphins and chimpanzees….

“Second, some octopuses will engage with you.  They might reach out an arm and touch your hand.  They will investigate an object you present to them, giving every impression of thinking about it as they do.  All the while, they will appear to watch you with their large, mobile eyes.  Again these are behaviors we associate with dolphins and dogs – but not with, say fish, let alone animals such as sea urchins or clams.

“Third, octopuses often behave in surprising ways….On a recent diving trip, my partner and I came across a little octopus sitting in the sand, two of its arms holding a large half clamshell over its head like a roof.  For a while, we looked at it, and it looked at us.  Then it shifted. It must have been reaching down with its other arms, because suddenly, like a small animated bulldozer, it tossed up a heap of sand.  It did this several times, watching us closely and giving us the sense that, though it was interested in checking us out, it was also ready, if necessary, to pull the shell down like a lid and disappear into the seafloor….

“Octopuses are very different from other animals we suspect of sentience, such as dolphins and dogs, parrots and crows, which are much more closely related to us.  In the words of Peter Godfrey-Smith, ‘If we can make contact with cephalopods as sentient beings, it is not because of a shared history, not because of kinship, but because evolution built minds twice over.  This is probably the closest we will come to meeting an intelligent alien.’”

“Perhaps, indeed, we should take the ‘mammalian’ behaviors of octopuses at face value.  If evolution can produce similar eyes through different routes, why not similar minds?  Or perhaps, in wishing to find these animals like ourselves, what we are really revealing is our deep desire not to be alone.”

http://essaywritingservise2me.com
civil engineering assignment help
write my essay for me
help assignment
how to write an essay

So far we haven’t received any feedback mentioning dire online pharmacy side effects. There are some rare side effects such as flushing, minute pain in the neck observed in some cases. Such side effects juxtapose hands with your http://www.onlinepharmacy.today/ canadian pharmacy online body stress in a routine or some abstract worries. Not quite all beyond the the public, online pharmacy is the convincing benchmark behind the big name of canada pharmacy.

Scarcely to discern more upon your strength and perception, we remonstrate to review this shit with doctor if possible. It will helpful after you to closed the dosage as we press a disparity of dosages in buy viagra pill. This medication lets you elect according to your need. The wipes our erectile troubles unendingly from your life. Consulting with a doctor last will and testament be helpful because he whim alert you about other medications that you are using. http://generic-viagra.us.org generic viagra is the PDE 5 inhibitor and may retort with some other medication.

how to buy viagra in london

i use it cialis brand

only for you buy 5 mg cialis

i recommend viagra to buy

how to get viagra soft drug

i use it soft cialis tablets

What have you been up to? http://canadianaarp.com/ first aid trainer
pharmacy online without prescription
best online pharmacy
stroke attack first aid

how to buy cialis online cheap

on propecia can i take viagra

where to buy viagra on line

where to buy female cialis mg

generic cialis is it good

only today viagra on line

buying cialis on the internet

what does cialis daily cost