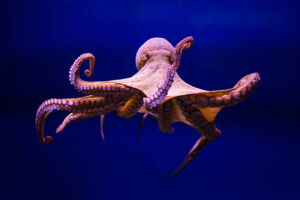 Time to put a spotlight on the Octopus, as it climbs to No. 3 on the ASL.  Last fall, Celia Jean of the Jerusalem Post asked the question, or rather Hebrew University did, “Could octopuses have more than one brain?”

We have long known the octopus is far more intelligent, and athletic, than ‘Man.’

But as Ms. Jean writes:

“The full intelligence of an octopus is not fully understood, however it is known that they have the largest nervous system among invertebrates – even larger than some vertebrates – with more nerve cells not in the brain itself but rather in its body and the tentacles.

“The question of multiple brains is one that many researchers are still investigating.

“The collection of sensory information and the ability to process it, learn from it and respond accordingly, is an essential aspect of animal behavior.  Octopuses, which are considered the most intelligent of the invertebrates even though the exact nature of their intelligence is sill unclear, provide us with a unique system for studying the relationship between sensory information, neural processing and motor activity.

“Evidence has been presented in the past that each of the octopus’s tentacles sometimes functions independently without exchanging information between themselves and the central brain system….

“In the brain of humans and vertebrates there exists an area for each body part, and the greater the amount of sensory cells in a particular organ (such as the tongue or finger), the larger the area of the brain that represents it. Body mapping such as this has not yet been found in the brain of an octopus.

“Many studies in recent years, led by Hebrew University Prof. Benny Hochner, support the idea that during evolution, octopuses have adapted to the ‘strange structure of their bodies and the unique organization of their nervous system to allow themselves to function efficiently in the absence of the body mapping in the central nervous system.”

So a study was conducted by Hochner and two other professors from the department of Neurobiology at the Institute of Life Sciences at the Hebrew University, in collaboration with Italy’s Center for Biorobotics at the Italian Institute for Technology, which was published in the scientific journal Current Biology.

“The learning ability of the octopus was tested and the level of information from the tentacles was examined.

“The researchers built two Y-shaped tubes inside the octopus aquariums, with food placed into one end of the Y-branch. The tubes were intentionally built narrow enough so that only one octopus tentacle could fit inside to figure out the location of the food.

“The octopuses could not see the arm or the food inside the maze, but learned that in order to obtain the food they had to put an arm into the maze and rely solely on sensory information from the arm moving in the ‘maze.’

“Throughout the experiment the octopus learned to put an arm in the maze and consistently send it to the right end of the y-branch in the tube.”

The study gets more complicated than this, but the bottom line was “The results of the study prove for the first time that the octopus brain does receive sensory information from the tentacles and that from this information the octopus can draw conclusions about the position and movement of the tentacles.

“The study also shows for the first time that the brain can control arm movement in real time even without the sense of sight, meaning that there is an exchange of sensory information from the arm to the brain at a high enough speed to make a decision about continued movement.

“In addition, one of the important findings found in the study is that octopuses do not always use the same arm, meaning information learned with one arm is available for use by another arm.  From this it can be concluded that the information itself is not processed or stored at the arm level but in the central brain.

“ ‘Our study makes it clear that although octopus tentacles have many autonomous movement and sense abilities, they are still an integral part of the octopus’s ability as an organism to understand and act in its environment – and when necessary they are under the control of the central nervous system,’ (Dr. Tamar) Gutnik explained.

There is a terrific little spot, the Oregon Coast Aquarium, outside of Newport, Oregon, which I’ve been to a number of times, in conjunction with my trips to take in the U.S. Olympic Track and Field Trials in Eugene.  I would always spend the ‘off days’ in Newport, which has a phenomenal walking beach and this aquarium that has a Giant Pacific Octopus exhibit.  Once it emerges from hiding, and you have to wait it out, observing its curiosity is fascinating.

Next ASL whenever the Supreme Council gathers again after the snows melt in Kazakhstan.

*U.S. representative to the All-Species List Executive Council, which is a notch below the Supreme Council.  No one ever gets to see the trio on the SC.  Messages are passed down the mountain by yak herders.