Wolverine and Beaver in Top Ten…Dog still No. 1 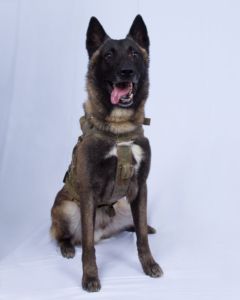 For good reason, ‘Dog’ remains No. 1 on the ASL.  I mean after all, a Belgian Malinois, the dog of choice in most special operations for the U.S. military these days, helped take out Abu Bakr al-Baghdadi, the leader of ISIS, the other day.

U.S. Army General Mark Milley, chairman of the Joint Chiefs of Staff, was tight-lipped about the dog’s identity, though the Washington Examiner said its name is ‘Conan.’  “The dog, the canine, the military working dog, performed a tremendous service, as they all do, in a variety of situations,” said Milley.  “We’re not releasing the name… The dog is still in theater.”

Working military dogs are usually ranked as noncommissioned officers, a higher rank than the dog’s handler and a way of instilling respect for the dogs, according to Ron Aiello, a retired Marine who runs the nonprofit U.S. War Dogs Association.

“They’re kind of the first line of defense,” Aiello told NPR.  “Their job is to detect any type of danger that’s out front.”

“They’re going into high-security areas on very dangerous missions, and those dogs will train with those troops for weeks,” Aiello said.

And that can mean the dogs parachuting out of airplanes, descending by rope out of helicopters with their handlers, and swimming to shore from a submarine.

The dogs are typically outfitted with night vision and a video camera that the dog’s handler watches in real time.  If danger is spotted, the dog will sit, signaling the troops to stop.

So here is the new Top Ten….

Speaking of the noble, yet mangy (and tasty) Yak, it’s been a while but we have to pay our respects to ‘Meteor,’ who escaped from his trailer on the way to the butcher in the mountains of Virginia last month, avoiding capture for days, yet eventually died when he was hit by a probable commercial vehicle while crossing a highway later; the driver, typical of the human race, not stopping, though hopefully had major damage to his rig that cost him $thousands.  [Johnny Mac, Justin Moyer / Washington Post]

As to the Wolverine….

“One night years ago, biologist Albert Manville drove to a garbage dump near Lake Louise in Alberta’s Banff National Park.  The site was unfenced back then, and grizzlies often came to rummage for leftovers.  Manville was watching a bear feast on a hefty scrap of meat when he noticed movement toward the edge of his car’s beaming headlights.  It was a wolverine, staring intently at the bear and the meat. What else could it do? It weighed maybe 30 pounds; the grizzly weighed several hundred.

“ ‘Then all at once the wolverine ran up and bit the bear right on the butt,’ Manville says.  ‘The grizzly whirled and swiped with a paw, but the wolverine was already racing around to one side.  It grabbed the meat and ran off into the dark.’

“A wolverine doesn’t seem like a reasonable beast, for it acts too tough and brazen for its size.  But at barely three feet long from keen nose to bushy trial, an average wolverine will claim a territory of 100 to more than 500 square miles, then patrol it at an unrelenting pace, sniffing, probing, hunting, scavenging, and defending its home from rivals.

“In the five years that I volunteered with a groundbreaking study in Montana’s Glacier National Park, I tracked one radio-tagged male as he climbed 1,500 feet straight up an ice-packed chute on a sheer mountainside and crossed the Continental Divide.  The ascent took him less than 20 minutes.

“Another male scaled the park’s highest summit – 10,466-foot Mount Cleveland – in January, when the peak was a towering ice sculpture.  He covered the last 4,900 feet in 90 minutes.  Within the next 10 days he climbed other crests to the west, turned north into British Columbia, loped east across the divide and on through Waterton Lakes National Park in Alberta, and returned south across more massifs to get back to Glacier.  No big deal.  Within a day or two he took off and made the journey all over again.”

But the status of the wolverine is very shaky.  Trappers, hunters and livestock owners erased it from much of Eurasia.  In North America, government-sponsored eradication campaigns against predators took a heavy toll, with the wolverine having disappeared in the lower 48 states by the 1930s.

But they still have strongholds in Alaska and western Canada. And now, as predator poisoning was phased out in the 1960s, they’ve begun recolonizing Montana’s high country and parts of Idaho and northern Wyoming.

Then in the 1990s, wolverines from Canada began venturing into Washington’s northern Cascades, though the population in all four states is small, an estimated 300 south of Canada.

Glacier National Park is home to the biggest population of wolverines, perhaps 30 to 40, which is all that would fit into the 1,500-square-mile park as they jealously guard huge territories.  Which creates a problem.  The populations aren’t large enough to sustain themselves.  We wish them luck.

Another species that was hunted and trapped to near extinction was the North American beaver.  Before the arrival of the European, there were between 100 and 400 million.  At its low point in the late-1800s it was down to 100,000.  But as beavers vanished, the wetlands they created dried up.  Streams eroded and millions of acres of watery habitat was lost.

But in the early 1900s, naturalists and biologists started to realize how important beavers were.  In New York, the state introduced about 20 beavers from Canada and Yellowstone in 1904.  Just 11 years later, there were 15,000 in the region descended from those early relocations.  Hey, they’re rodents, so they reproduce quite quickly.  The New York beavers then dispersed into other states and recolonized the landscape.

But the successful return of beavers meant they started to bump up against people.  As beaver expert Ben Goldfarb out of Yale University notes, however: “One of the mantras of those who work in beaver restoration is ‘Let the rodent do  the work.’  This animal can provide us a huge amount of help – storing water, improving water quality, creating wildlife habitat, even sequestering carbon.”

“Beaver restoration suggests a new approach to ecological restoration in general.  One that is more holistic and in tune with the natural world,” Goldfarb adds.

Heck, we now have pro-beaver ranchers in Nevada, where the reintroduction of the rodent has led to wetlands producing 1,000 pounds of grass per acre that they use to feed their cattle.  The beavers irrigated an entire valley around Susie Creek.

A 2016 study in the Pacific Northwest found a 52% survival increase in juvenile steelhead trout, a threatened species, due to the beavers’ work.

Wildfires create terrible air pollution in the western United States, but a network of beaver ponds can stop fires and provide a refuge for animals.

So we honor the Wolverine and Beaver, for different reasons, with placement in the top ten of the ASL.

We’ll update the ASL after the first of the year.  I’ll just say that ‘Great White’ has to pick up his game.